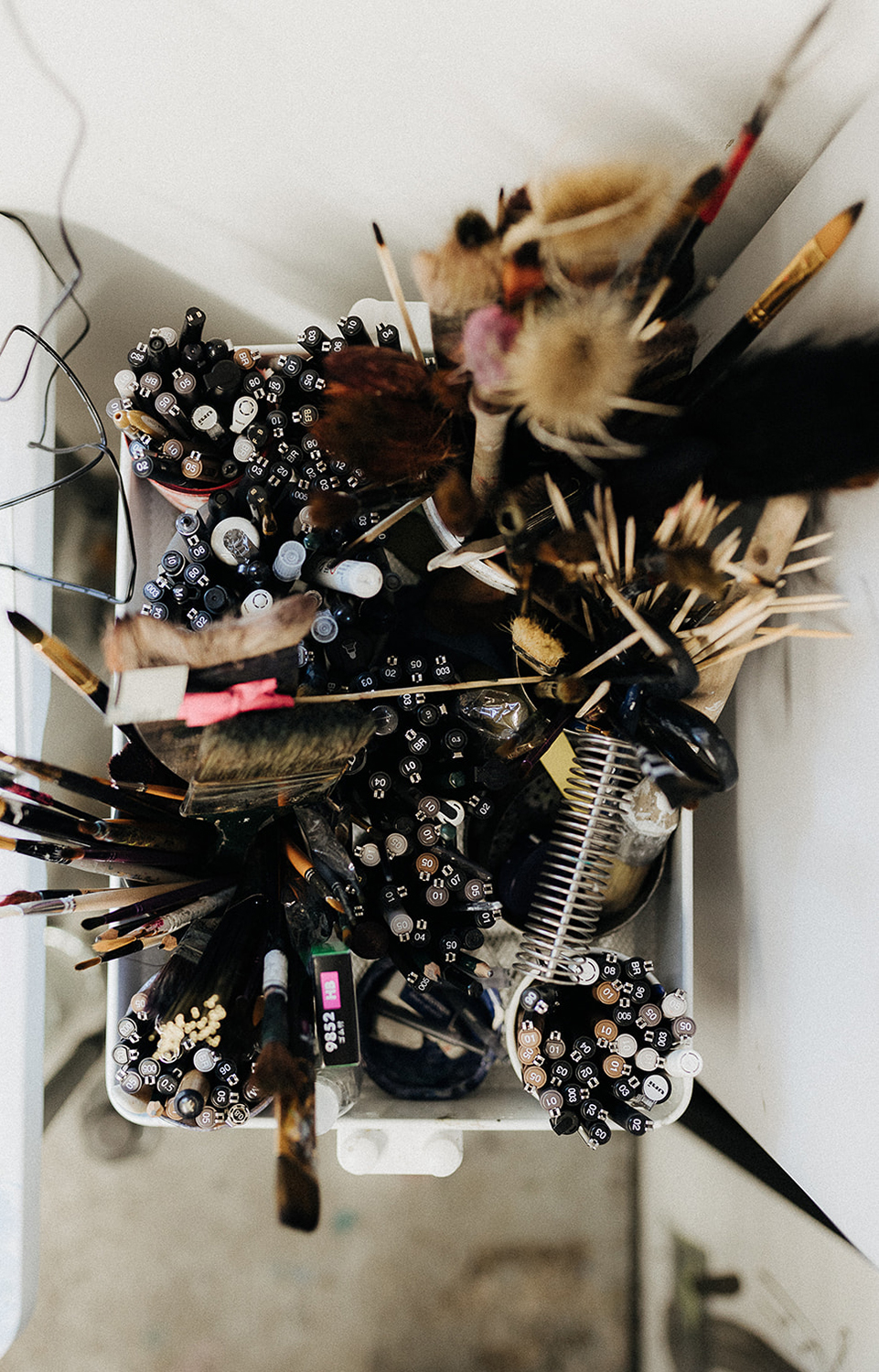 It starts with playing.

I have to let intuition guide me a little. If I use a square brush, I know that I want to explore something about form, with spontaneity and looseness. It involves memory and even muscle memory of making those marks.

If I pick up a pen I know I want to be precise, when I use a particular brush I want to be expressive in a different way. I’ll know it instinctively when I start. 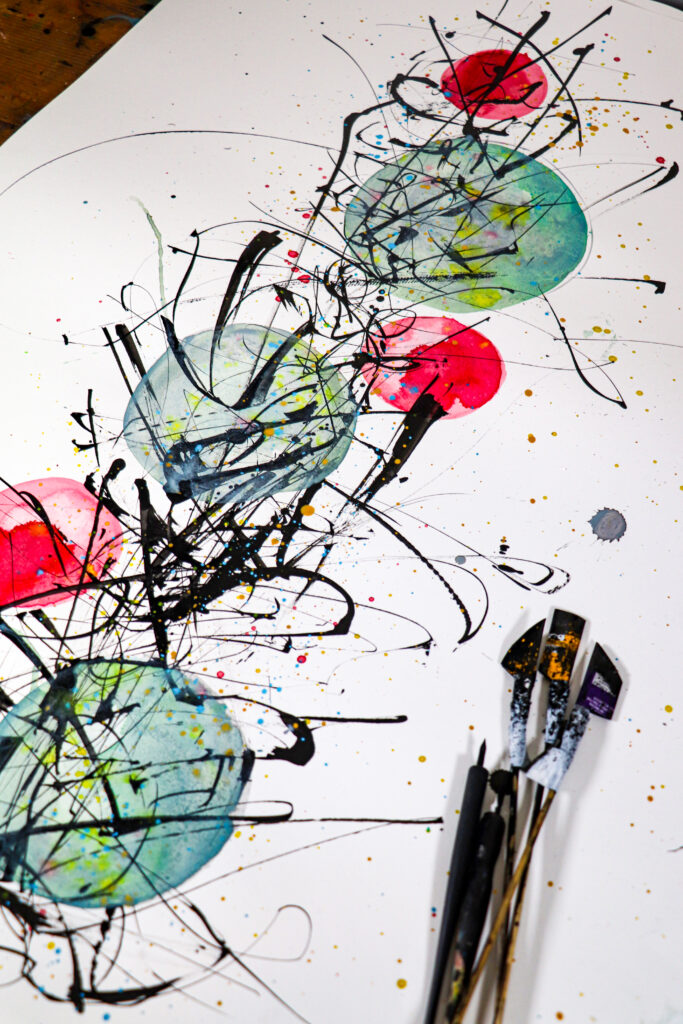 Then, once I introduce the colours, form and composition, I’ll know what theme it’s taking. It can almost be like you’re in a trance, a slightly different level of consciousness. I’m alert, and the marks I make are deliberate, but there’s also a flow, a dance, which you don’t have to think about, and it just happens. 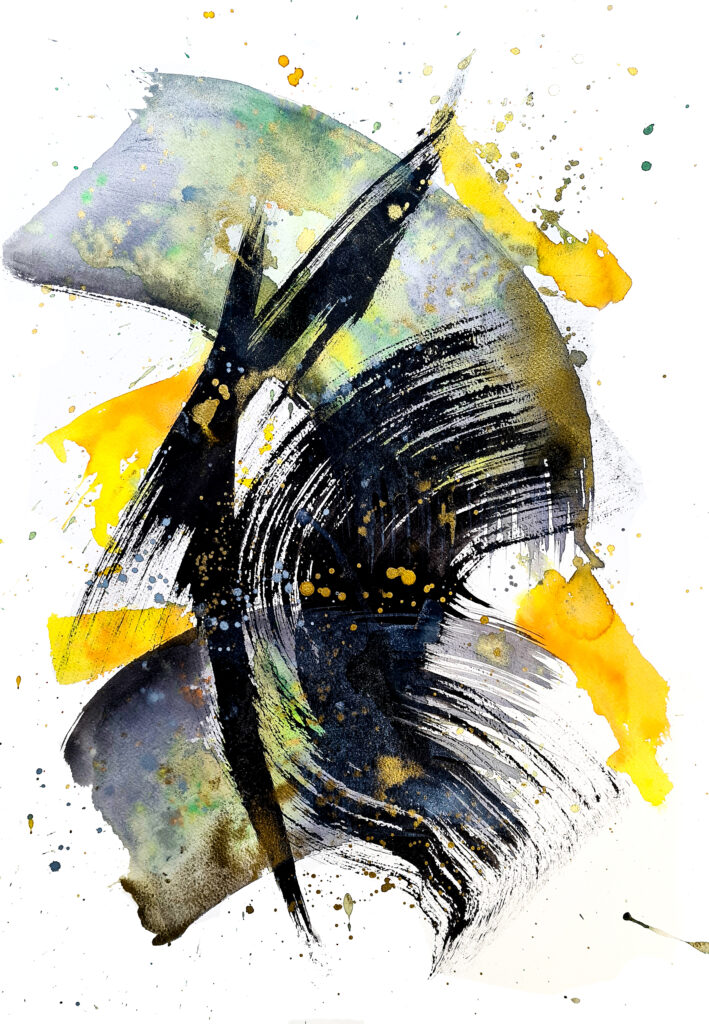 If I’m holding a large square brush, how do I make that curve? How do I make those gestures, those swooshes and dashes that look like they’re moving even if they’re static? They’re still but they’ve got movement, like they’re about to fly. Or a mark that’s got to be so solid. I’m not thinking hard about it. If I’m too diligent it doesn’t work. I’ve got to be purposeful, but at the same time I’ve got to let go and be free. Focused but free. 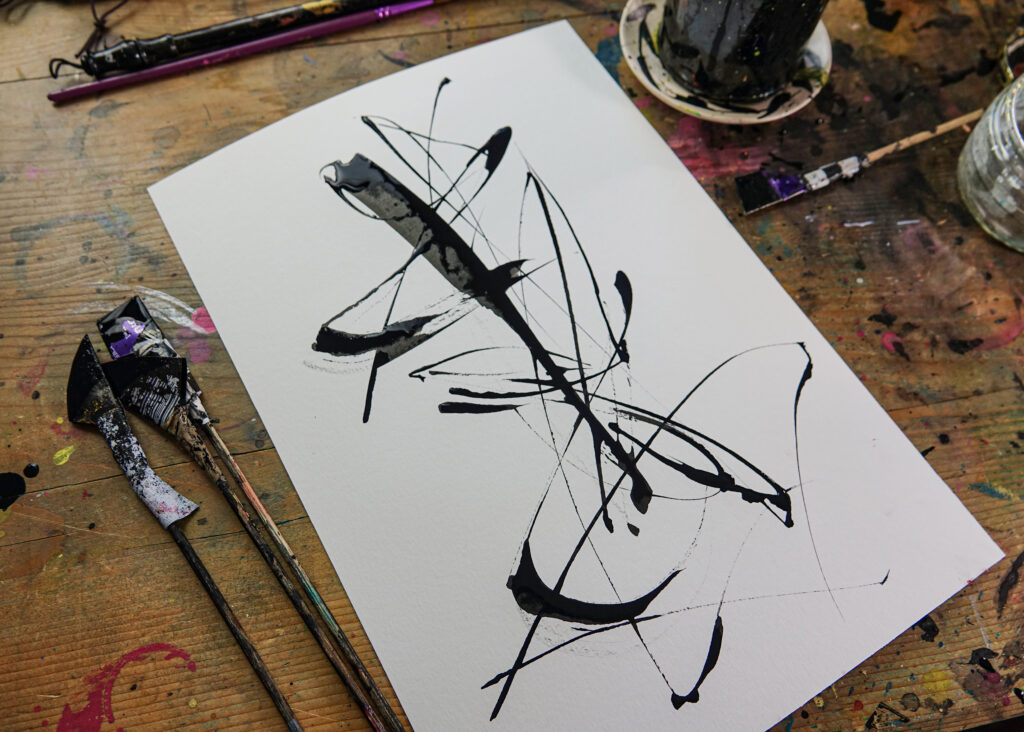 I’ve always liked ink. I like the unruliness of it and that you’ve got options to use a pen or a brush, and to water it down to create washes. There’s a lot of scope. 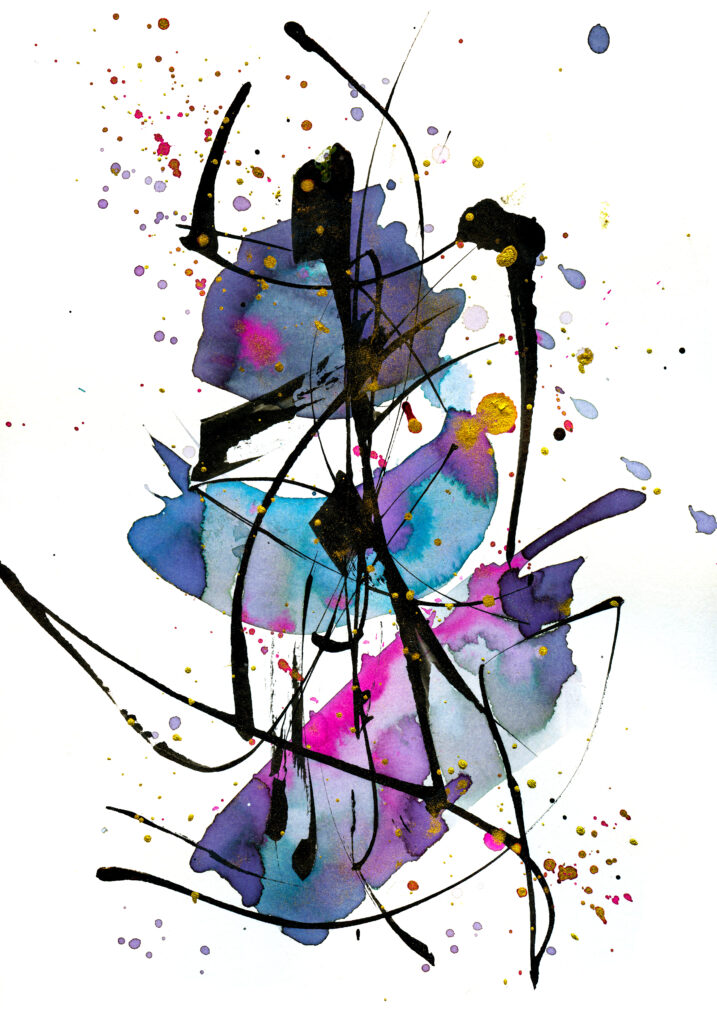 In the past few years I’ve also experimented with different types of mark-making tools. I’ve used feathers, and reeds from the marshes near where I live, and broom, and the seed-heads of teasel. They make different types of mark. And there’s something more fluid about inks than paint when you make those marks. I like its immediacy, its unforgiving nature. 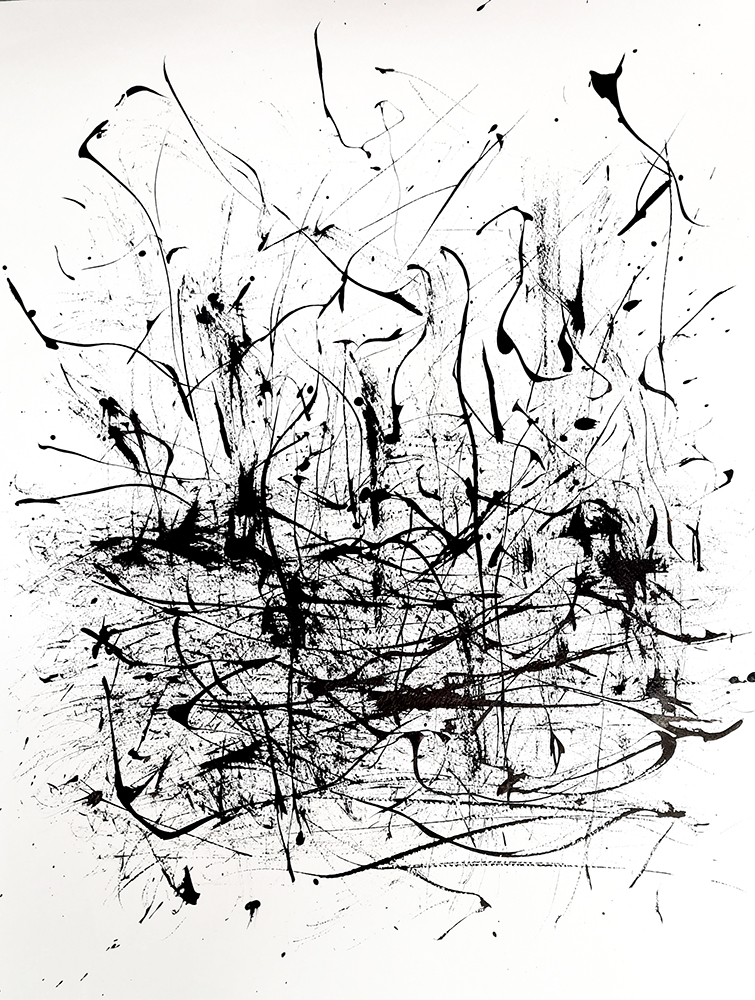 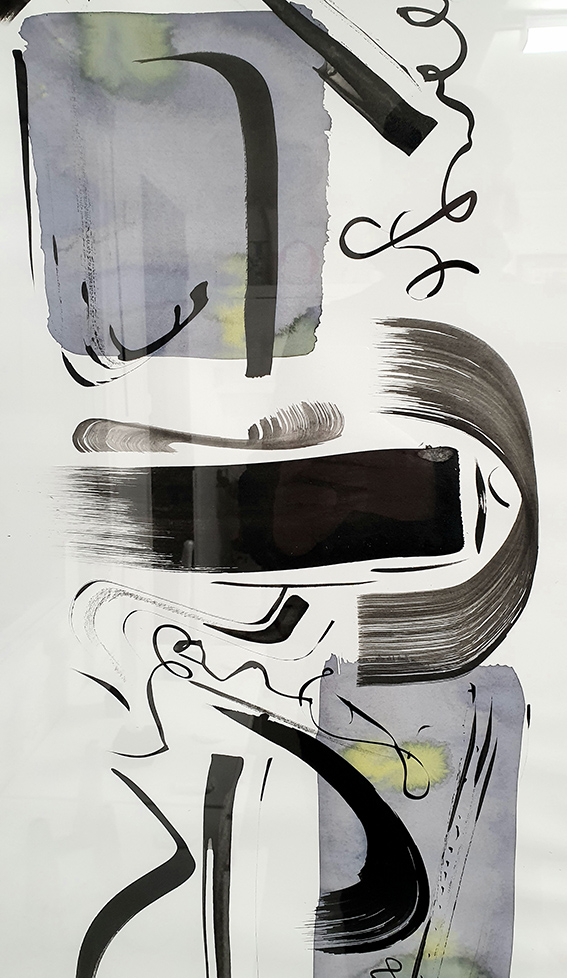 If I’m using soft round brushes, I might know that I want to press the full weight of the brush down and drag it. Or I might want to work with the tip of a calligraphy brush to produce very fine lines. With a tin-can pen you’re not going to get a consistent line. It doesn’t hold ink in that way. You don’t control it in the way you do with a brush. 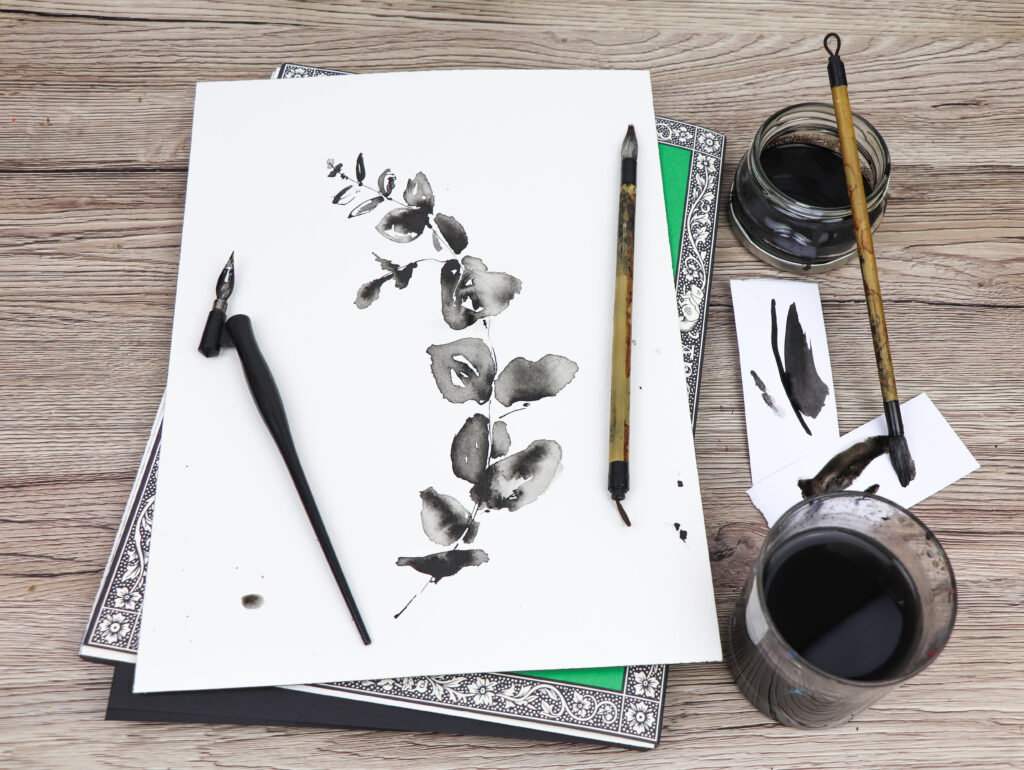 I often use the tin-can pens to create a kind of central column in the work, which is a kind of upwards life force. There’s a journey there, a sense of collision and violence, but an upward momentum and force. The hard lines and edges of the pen strokes, in contrast to the soft lines of the brush produce collisions. Then I’ll add extra shapes, circles or blocks of colour. And in doing all this there’s a search for balance, beauty and harmony. There’s a mood. It’s a mood of stillness and movement and the contrast between them. 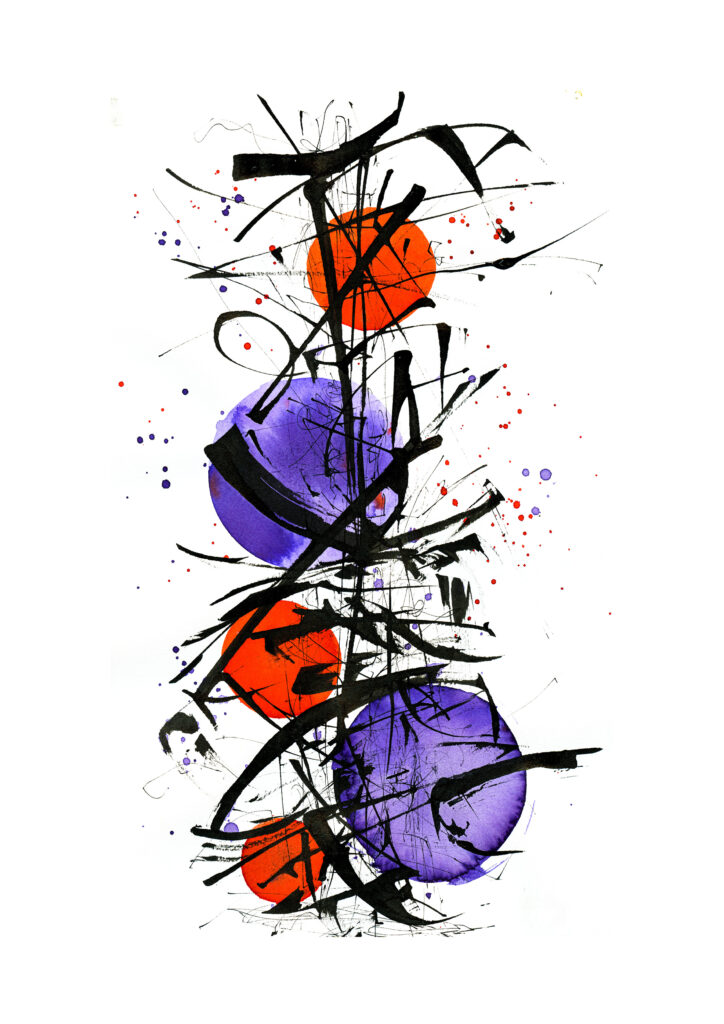 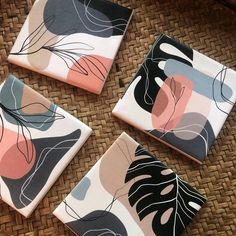 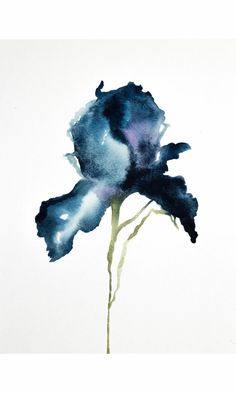 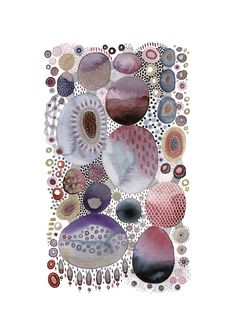 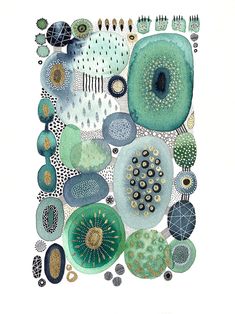 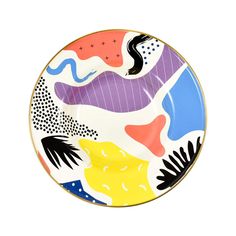 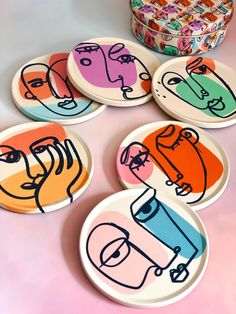 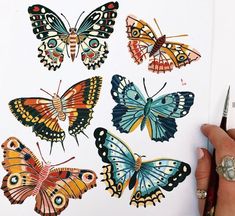 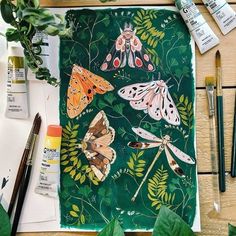 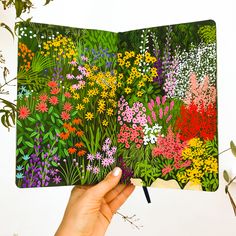